Marine biologist Dr. Kristina Boerder has launched a Go-Fund-Me campaign to fund important scientific research at Owls Head Provincial Park. If you can’t afford to make a donation, check out other ways to take action, here.

In 2019, Owls Head Provincial Park Reserve was secretly delisted by the Nova Scotia government. The decision to sell off these public lands for the development of multiple golf courses was made without public consultation. When the story of the delisting broke, Nova Scotians were outraged.

As a coastal headland on the Eastern Shore, Owls Head Provincial Park holds tremendous value for conservation and has been promised protection for nearly half a century. This area provides important habitat to species like piping plovers, barn swallows and ruby-crowned kinglets. Healthy eelgrass and kelp beds surround Owls Head Provincial Park and offer a safe place for fish, crab, and lobster to spawn and feed.

Last summer, a group of volunteer scientists embarked on a series of expeditions to study the ecosystems and species that call Owls Head Provincial Park home. Teams of biodiversity experts and citizen scientists were able to identify 70 species of birds as well as measure and assess the health of eelgrass beds underwater, an important ecosystem to mitigate climate change.

Please help us with this important research at Owls Head Provincial Park! Your contribution will cover essential costs for volunteers during our scientific expeditions, including:

The findings from our 2021 expeditions will be publicly available so everyone can learn about the conservation value of Owls Head Provincial Park.

Thank you so much for your support. 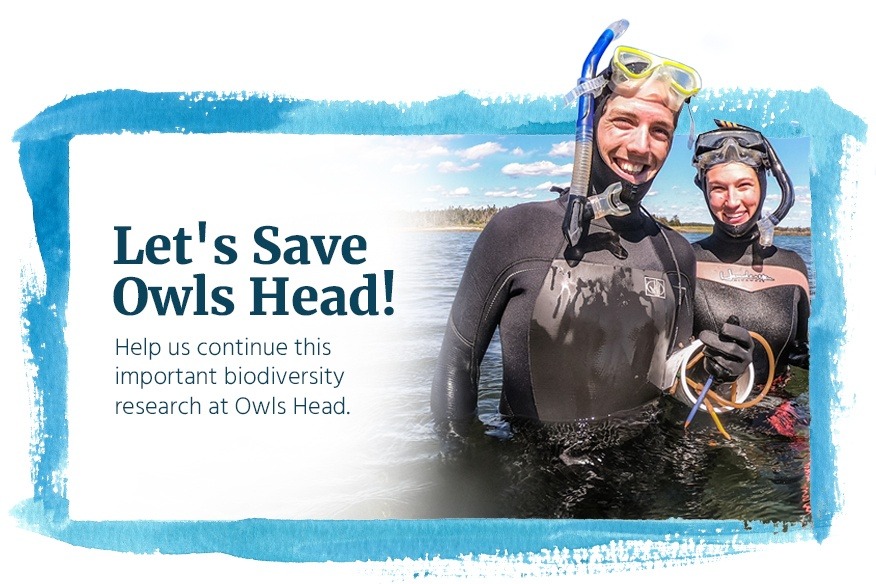 The reaction was swift and almost universal across the province: “OMG, not again!”  The dust has barely settled on the Owls Head fiasco and another American billionaire golf course developer has the temerity to take Read more…

“This species being the only one found in the Maritime provinces would easily fit in as a species at risk in the Nova Scotia context. So in that way it’s quite special. You could say Read more…