Photo by Caitlin Grady of CPAWS-NS 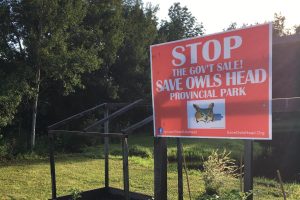 It’s not just sign or a bumper sticker anymore. It appears to be a reality.

The government sale of Owls Head Provincial Park is stopped, at least for now. Lighthouse Links, the company that planned to develop a golf course on the provincial park, is withdrawing the letter of offer it signed with the province in 2019. That’s according to Michael Gorman at the CBC, who broke the story Tuesday.

Following the decision, the company issued a statement to the CBC, writing: “We have concluded that we do not have the support of the government of Nova Scotia necessary to make this project a reality.”

… Three months after that court dismissal and the ensuing rally, and nearly two years after the park was delisted, the sale appears to be dead in the water.

The province could still conceivably find a new buyer for the park land. But for now, Owls Head Provincial Park, and its supporters, can rest easy. 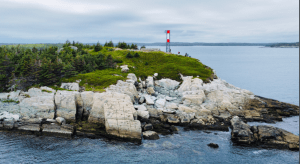 “I doubt if the ministers who made this announcement today are doing it with the intention that some future government might undo what they have done,” Plourde said of Monday’s announcement to designate 9,300 hectares Read more…

Despite the court’s contention that the “issue arising in this case has not recurred and may never recur,” a very similar situation could arise from a  proposal by Cabot Cape Breton, owners of two successful Read more…

“The recent contention around golf course proposals for West Mabou and Owls Head surely must have Nova Scotians, locally in the Mabou area and across the province, wondering if our provincial park properties will ever Read more…